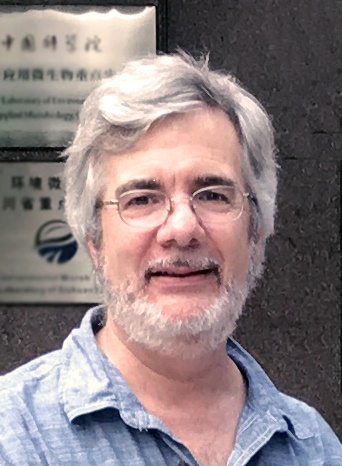 Tell us about your research: I’m an evolutionary biologist with a passion for understanding the amphibian Tree of Life. My lab focuses on research on evolution of frogs from a phylogenetic perspective. These include speciation, biogeography, biodiversity of Neotropical species, phylogenomics, integrating fossil and phenotypic data, acoustic communication, aposematism and chemical defense in poison frogs.

Several of these topics revolve around poison frogs, a group of about 300 Neotropical species, many of which are brightly colored and have distasteful alkaloid compounds in their skin. This is how the frog warns a predator to leave it alone. In the big picture, this combination of a warning signal (bright colors) and a defense (distasteful chemicals) has evolved independently several times and in different ways in animals such as bumblebees, skunks, coral snakes, monarch butterflies, nudibranch mollusks, and salamanders. Frogs don’t make their own alkaloids, but instead get them from arthropod prey, and store them in their skin. This raises a basic question—why don’t the poison frogs poison themselves? To answer this, we look at the complex interactions between behavioral ecology, phylogenomics, and molecular evolution, to understand how the frogs make their living in the natural environment, how these interactions evolved at local and large scales, and how the frog is protected from its own toxins at the molecular level. These approaches rely on new directions that are led by my graduate students and postdocs.

Why do you want to serve NSF? As the primary federal agency supporting evolutionary research, NSF relies on input and expertise from the community of scientists to assess what type of science best serves the community and nation, now and for the future. I was really excited by the possibility of working with others to contribute to the advancement of the best science, even though I had just a vague idea of what day-to-day life would be like.

What are you most looking forward to during your tenure at NSF? I am enthused by the chance to interact with a large and diverse community of scientists, some on temporary assignment like myself, and others who have dedicated their talents long-term to promoting excellence in research and researchers. Also, during my break from academic life I hope to pick up some administrative skills that will be useful when I return to UT.