Editor’s note: This post was contributed by outgoing rotating Program Officer Alan Wilson and is a write-up of part of a project performed by DEB summer student Zulema Osorio during the summer of 2015.

Generalizability has been fundamental to the major advances in environmental biology and is an important trait for current research ideas proposed to NSF.  Despite its significance, a disconnect between terrestrial and aquatic ecological research has existed for several decades (Hairston 1990).

For example, Menge et al. (1990) quantitatively showed that authors heavily (~50%-65%) cite more studies from their representative habitat but that terrestrial ecologists are less likely to include citations from aquatic systems than the converse.  Failure to broadly consider relevant literature when designing, conducting, and sharing findings from research studies not only hinders future scientific advances (Menge et al. 2009) but may also compromise an investigator’s chances for funding[i] when proposing research ideas.

More recently, there have been anecdotal reports from our PI community that freshwater population or community ecology research is under-represented in NSF’s funding portfolio.  To explore the potential bias in proposal submissions and award success rates for ecological research associated with focal habitat, we compared the submissions and success rates of full proposals submitted to the core Population and Community Ecology (PCE) program from 2005-2014 that focused on terrestrial systems, aquatic systems, or both (e.g., aquatic-terrestrial linkages, modeling, synthesis).  Data about focal ecosystems were collected from PI-reported BIO classification forms.  To simplify our data analysis and interpretation, all projects (including collaboratives) were treated only once.  Also, the Division of Environmental Biology (DEB) switched to a preliminary proposal system in 2012.  Although this analysis focuses only on full proposals, the proportion of preliminary and full proposal submissions for each ecosystem type were nearly identical for 2012-2014.  Some projects (2.7% of total projects) provided no BIO classification data (i.e., non-BIO transfers or co-reviews) and were ignored for this project.  Finally, several other programs inside (Ecosystem Science, Evolutionary Processes, and Systematics and Biodiversity Science) and outside (e.g., Biological Oceanography, Animal Behavior, Arctic) of DEB fund research in aquatic ecosystems.  Thus, our findings only relate to the PCE portfolio.

In total, 3,277 core PCE projects were considered in this analysis. Means + 1 SD were calculated for submissions and success rates across 10 years of data from 2005-2014. Terrestrial projects (72% ± 2.8% SD) have clearly dominated projects submitted to the core PCE program across all ten years surveyed (Figure 1).  Aquatic projects accounted for 17% (± 2.6% SD) of the full proposal submissions while projects that include aspects of both aquatic and terrestrial components accounted for only 9% (± 1.6% SD) (Figure 1).  The full proposal success rate has been similar across studies that focused on terrestrial or aquatic ecosystems (calculated as number of awards ÷ number of full proposal submissions; Figure 2; terrestrial: 20% ± 6.9% SD; aquatic: 18% ± 6.5% SD).  Proposal success rate dynamics for projects that focus on both ecosystems are more variable (Figure 2; 16% ± 12.7% SD), in part, due to the small population size (9.5% of the projects considered in this study).

Figure 1. Proportion of full proposals submitted to PCE based on focal ecosystem from 2005 to 2014. 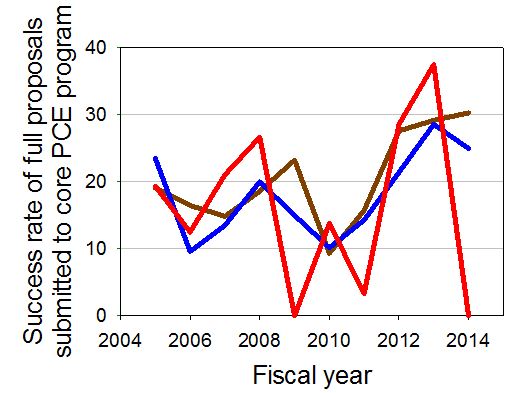 Figure 2. Success rate of full proposals submitted to PCE based on focal ecosystem from 2005 to 2014.

In summary, anecdotal PI concerns of fewer funded aquatic proposals in PCE are consistent with available data but are an artifact of fewer aquatic proposal submissions.  Although funding rates for all full PCE proposals have generally varied from 2005-2014 (mean: 19.9% ± 6.4% SD; range: 11%-29%) as a function of available funds and the number of proposals considered, terrestrial- and aquatic-focused research proposals have fared similarly for the past decade.  PCE, like the rest of DEB and NSF, is motivated to have a diverse portfolio and encourages ecologists from varied institutions and backgrounds to submit ideas that study interesting, important questions that will generally move the field of population and community ecology forward.

Figure 1. Submission history of full proposals submitted to the core PCE program from 2005-2014 for terrestrial (brown), aquatic (blue), or both ecosystems (red).  Proposals were classified based on PI-submitted BIO classification forms.  Note that some projects did not provide BIO classification data.  These projects were ignored for this analysis and explain why yearly relative data may not total 100%.

Hairston, Jr., N. G. 1990. Problems with the perception of zooplankton research by colleagues outside of the aquatic sciences. Limnology and Oceanography 35(5):1214-1216.

[i] Generalizability “within its own field or across different fields” is a principal consideration of the Intellectual Merit review criterion: http://www.nsf.gov/pubs/policydocs/pappguide/nsf16001/gpg_3.jsp#IIIA

One thought on “DEB Numbers: Are aquatic ecologists underrepresented?”