This is a quick numbers post while we in DEB pivot from summer research and meeting outreach to fiscal closeout and autumn (full proposal) panel mode.

CAREER proposals in BIO were due on July 21, 2014. These proposals will be reviewed this fall and become part of the FY 2015 decision-making process. In this post, we take a look at the trends in submission of CAREER proposals through the current competition. We aren’t looking at funding rates or outcomes – those are beyond the scope of today’s post.

If you have no clue what a CAREER proposal is, skip to this short primer.

The CAREER program is a long-standing, foundation-wide opportunity for junior faculty. In DEB, CAREER proposals can provide eligible PIs an additional submission above and beyond the 2 allowed annually in the core programs.

Some DEB staff were concerned that we would see a substantial increase in CAREER submissions after the launch of the preliminary proposal process for the core programs. The reasoning was that CAREER-eligible junior faculty who were not invited to submit a full proposal would submit a CAREER instead. Alternatively, others pointed out that a competitive CAREER proposal differs substantially from a regular research proposal and that one does not simply flip a project idea from one to the other. Going in to the preliminary proposal system, it was an open question as to how CAREER submissions would respond.

Between 2002 and 2007, we received 40-60 CAREER proposals per year. There was rapid growth from 2008 to 2009 and 2010, well before the preliminary proposal process was launched, but that trend has not continued over the 5 subsequent deadlines. There is a jump in 2013, the first CAREER deadline after the switch to preliminary proposals, but that level has not been maintained. It appears that, 3 years in, we have not experienced a large shift of DEB proposals into the CAREER mechanism. Anecdotally, a few comments we’ve heard suggest that CAREER proposals continue to be seen as prestigious awards with high expectations at the review stage so many eligible PIs may be hesitant to apply. Supposing this view is sufficiently widespread it could easily suppress the numbers of PIs who would otherwise turn to this program after or instead of a core program submission.

While there was little change in CAREER submission numbers after the switch to the preliminary proposal system in DEB, the story is somewhat different in IOS (which instituted preliminary proposals at the same time) and MCB (which instituted a single deadline and PI submission limit of 1). Both of these Divisions also started from a very different place than DEB with respect to CAREER submissions. IOS and MCB received larger numbers of CAREER proposals than DEB in the years immediately prior to their respective review process changes and there are less tangible but important cultural differences in community expectations and approach to CAREER proposals. MCB was coming down from a submission peak (217 CAREER proposals) in 2006 and IOS was at a plateau ~110 following substantial submission growth in the early 2000s. 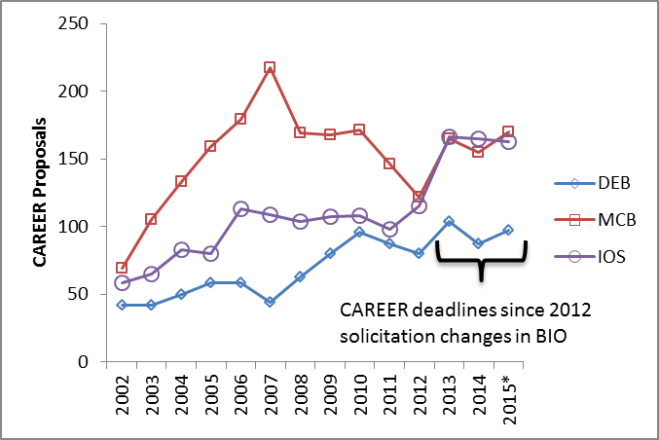 *The 2015 numbers may be revised if some submissions are returned as incomplete or out of compliance.

Both IOS and MCB experienced actual and proportionately larger initial jumps in CAREER submissions post-2012 than DEB. And, neither IOS nor MCB experienced a drop of similar magnitude to DEB during the second or third year since their solicitation changes. It’s not clear why the reaction in these two Divisions differed so much from the DEB communities. Potential reasons include: larger communities with larger potential for increases, influx of PIs from the biomedical community seeking funding, and differing perceptions and expectations for CAREER submissions relative to regular proposals.

Even though three years is a short run, CAREER submissions from 2013 onward in each of the three Divisions appear to be relatively stable. Concern about overwhelming growth in CAREER submissions has not been borne out. However, it is unclear why numbers went up and remained there in MCB and IOS but not DEB and what that means for us. Are DEB PIs and/or reviewers much more selective as to what they will put forward for a CAREER award? Do the demographics differ between the fields enough that we were already saturated with CAREER submissions while the other Divisions were not? Or is the variation stochastic? If anyone has data that might shed some light on these questions, we’d be happy to know.

CAREER is shorthand for the NSF-wide Faculty Early Career Development Program. The CAREER program is distinguished from other NSF opportunities by being exclusively for pre-tenured faculty and specifically focused on excellent educational aspects integrated with an outstanding research program. In addition to being considered a prestigious award in its own right, receipt of a CAREER award is a prerequisite of eligibility for the Presidential Early Career Awards for Scientists and Engineers (PECASE).

CAREER program submissions have a single annual deadline in mid-to-late July (exact date varies by directorate) and are reviewed by the most relevant disciplinary program. In DEB, CAREER proposals are taken to review in our fall full proposal panels, alongside invited full proposals, OPUS, and RCN submissions, and co-review proposals as we have previously illustrated. While not the normal practice in DEB, it is fairly common across NSF to have panels exclusively for CAREER proposals in programs where there are large numbers of CAREER submissions and/or no other close deadlines. [back to top]