NSF Experience: I started working at NSF in October of 2011. I am a Program Analyst, which is a member of the administrative support staff at NSF, with two of DEB’s clusters: Evolutionary Processes (EP), and Systematics and Biodiversity Science (SBS). In addition to working with these core programs, I help support the review panels for Ecology and Evolution of Infectious Diseases (EEID) and Dimensions of Biodiversity. 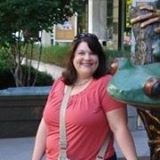 Background: My background is all over the place. After receiving my undergraduate degree, I served as a Peace Corps Volunteer for 3.5 years in the country of Niger, West Africa.  I lived in a very small village (~500 people) and worked primarily with the local women on gardening and tree-planting projects. Additionally, the part of Niger in which I lived was home to the last herd of giraffe in all of West Africa, Giraffa camelopardalis ssp. peralta, so my work also included helping develop ecotourism in the area, environmental education, and collecting data on the movements and behavior of the giraffe—there were only ~87 in the entire herd when I was there in the late 1990s. Upon returning to the U.S., I worked in the Education Department of a Zoo in Florida for several years, both as the Director of the Volunteer Docent program and then as an animal keeper.  From the Zoo, I returned to school to pursue a Master’s degree. My advisor at the University of Central Florida was Dr. Jane Waterman and I worked on her project in South Africa looking at the evolution of social behavior in the Cape ground squirrel (Xerus inauris); my research project was specifically focused on ovulation in the squirrels. I had the glamorous job of collecting squirrel urine, and loved every minute of it. I then spent nearly 2 years as a high school biology teacher before moving to D.C. and working for the Peace Corps Agency supporting programs designed to help U.S. teachers incorporate Peace Corps Volunteer experiences into their classrooms.  After working there for 3.5 years, I came to work for NSF.

I was following a group of giraffe in Niger—about 15 adult females with their young and one very large male. They had just settled down to start browsing, so I parked myself under an acacia tree and started taking notes. The landscape of this part of Niger is open plains, dotted with trees. After about 30 minutes of observing these giraffes, a group of SUVs comes barreling across the field. The SUVs stopped on the opposite side of the herd from where I am sitting and a bunch of tourists jump out and start taking photos. The giraffes get spooked by the cars and start running away, which means they are running toward me. Fortunately, I am under a pretty big tree and most of the giraffes just run by without even taking notice of me. Unfortunately, the male is taking his time following the rest of the group and he spots me. Not only does he spot me, he takes a less than friendly interest. He walks straight toward me, lowering his head a little as he approaches.  He stops about 15 feet away and is staring right at me.  At this point, I was expecting to get kicked or head-butted by this great big giraffe, but after about 30 seconds of intense glaring (although it seemed at the time to be much longer), he gave a little grunt and galloped off after the rest of the group.  Phew… 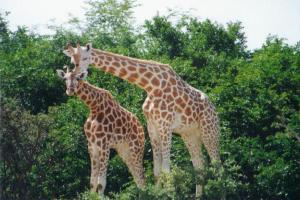 Keeping in touch with friends and family and enjoying DC: the museums, theaters, restaurants, etc… It’s a great city!  I’ve been here for 5 years and I still feel like I’ve barely scratched the surface. And, I’m a big fan of the Washington Nationals.

What attracted you to your current position?

What profession other than your own could you see yourself doing?

I also thought I would have a profession that took me overseas, so can envision myself working for the Foreign Service as an embassy employee of some sort.